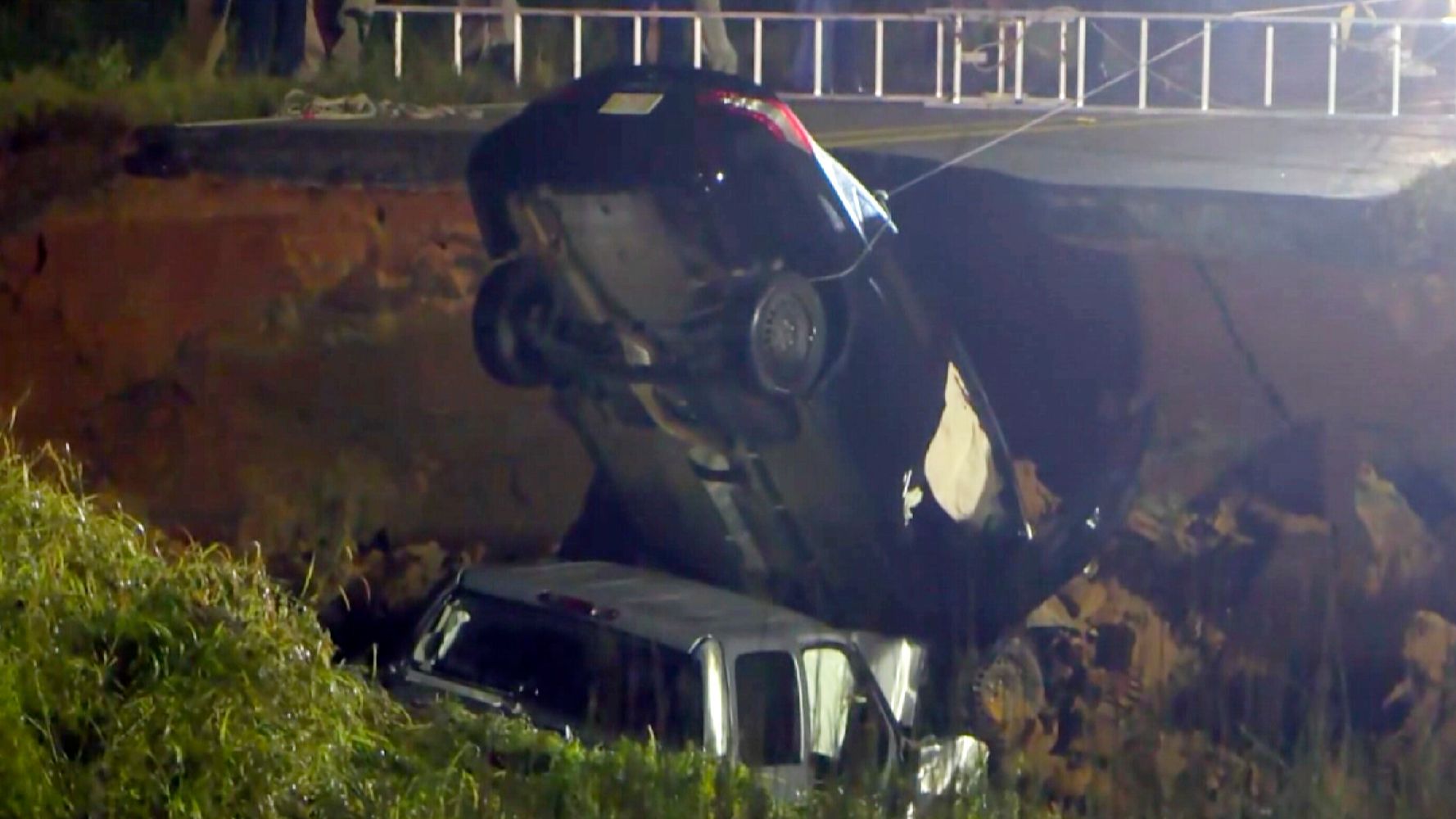 Torrential rain may have caused a rural highway to collapse in Mississippi on Monday night.

LUCEDALE, Miss. (AP) — Two people were killed and at least 10 others were injured when seven vehicles plunged into a deep hole where a dark, rural highway collapsed as Hurricane Ida blew through Mississippi.

Torrential rain may have caused the collapse Monday night, and the drivers may not have seen that the roadway in front of them had disappeared, Mississippi Highway Patrol Cpl. Cal Robertson said. The George County Sheriff’s Department received the first call about a crash at about 10:30 p.m.

Robertson told The Associated Press that some of the vehicles ended up stacked on top of each other as they crashed into the abyss, which opened up in a rural area without street lights. Ida dumped as much as 13 inches (33 centimeters) of rain as it blew through Mississippi, the National Weather Service said.

“You can imagine driving at night with heavy rain coming down,” Robertson said. “It’s just nothing but a wall of water, your headlights kind of reflecting back on you.”

State troopers, emergency workers and rescue teams responded to Highway 26 west of Lucedale, about 60 miles (96 kilometers) northeast of Biloxi, to find both the east and westbound lanes collapsed. Robertson said the hole is around 50 to 60 feet (15 to 18 meters) long and 20 to 30 feet (6 to 9 meters) deep.

A crane was brought in to lift the vehicles out of the hole.

Jerry Lee, 42, of Lucedale, was pronounced dead at 1:20 a.m., George County Coroner DeeAnn Murrah told the Sun Herald. Murrah said she was notifying the family of the other person killed before releasing that person’s name.

Mississippi southern district Transportation Commissioner Tom King said he didn’t know anything unusual about the soil conditions where the highway caved in.

“We just got bombarded here in south Mississippi with rain,” King told The Associated Press.

King said work crews were checking other highways in areas that received heavy rain from Ida.

Between 3,100 and 5,700 vehicles drive along the stretch of two-lane highway on an average day, according to Mississippi Department of Transportation data.

“It’s going to take us a while to redo it and make it right again and make it safe for folks to go over,” King said of the collapsed roadbed.

Hurricane Ida blasted ashore Sunday as a Category 4 storm, one of the most powerful ever to hit the U.S. mainland. It knocked out power to much of southeastern Louisiana and southern Mississippi, blowing roofs off buildings and causing widespread flooding as it pushed a surge of ocean water that briefly reversed the flow of the Mississippi River.