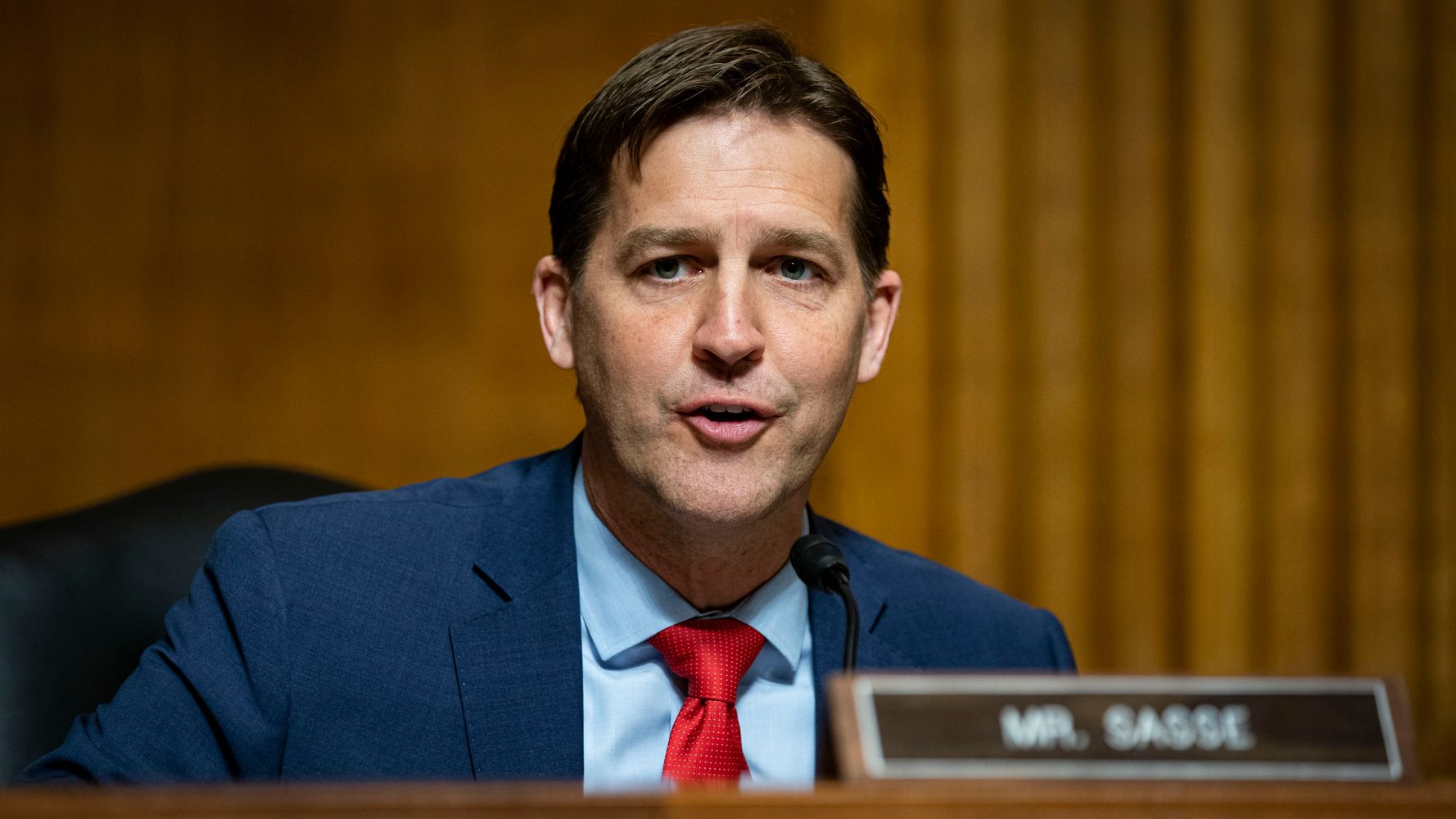 Their proposed solution: more war with the Taliban.

﻿Republicans are pushing President Joe Biden to take actions that would amount to re-invading Afghanistan by either requiring the U.S. military to retake an abandoned air base or staying in the country long enough to restart the dormant war with the Taliban.

The calls were amplified Thursday following the deaths of a dozen U.S. service members and more than 50 Afghan civilians in a pair of bombings near the Kabul airport, the center of the American effort to evacuate the country’s wartime allies from Afghanistan. Intelligence officials believe a branch of the self-styled Islamic State (ISIS) that has battled the Taliban for influence are responsible for the attacks, according to reports.

In a statement, Sen. Ben Sasse (R-Neb.), who has long opposed efforts under both Biden and President Donald Trump to end U.S. involvement in the two-decade war, said Biden needed to “rip up the Aug. 31 deadline and defend evacuation routes” by expanding the perimeter around the Kabul airport or by retaking Bagram Air Base.

“You are the commander in chief, sir; reverse course and fight for our people. This is likely to get worse, and weakness will accelerate the bloodshed,” Sasse said.

Other Republicans similarly suggested the United States pour more troops into the country.

“I’d put more military in there, I’d get every single American out and I’d start killing bad guys,” Rep. Mark Green (R-Tenn.), Trump’s onetime nominee for secretary of the Army, said during an appearance on Fox News that ended with him calling for Biden’s resignation. (Green did not appear to realize the contradiction between getting Americans out and putting more American service members in.)

The GOP calls ― backed by some Democrats who also want the U.S. to maintain its presence in the country ― lay out how the choice facing Biden was never about simply maintaining a nonviolent status quo versus withdrawing. It was about either withdrawing or ramping up the $2 trillion war and nation-building effort, a deployment that multiple presidents had pledged to end and which military and political leaders repeatedly misled the public about.

“Imagine where we’d be if I had indicated on May 1 that I was not going to renegotiate an evacuation date, that we were going to stay there,” Biden said in response to questions from reporters Thursday, laying out the choice as he saw it. “I would have had only one alternative: to send thousands of troops back into Afghanistan.”

Biden has already had to send in more troops: More than 5,000 are assisting with the evacuation from Hamid Karzai International Airport in Kabul, and he indicated during his speech Thursday evening that he was likely to order attacks on the leaders of the Afghan branch of ISIS who ordered the suicide bombings, promising to “hunt” those responsible.

But the actions Sasse suggests would almost certainly restart the war with the Taliban, which has been on hold since the Trump administration reached a cease-fire with the terrorist group in February 2020. That cease-fire has sharply limited U.S. military deaths in the country.

Retaking Bagram Air Base ― a 90-minute drive north of Kabul in a mountainous region that only experienced pilots were trusted to navigate ― would require breaking that cease-fire because the Taliban would not give up the strategically valuable location without a fight. (Biden told reporters on Thursday that military leaders had decided it made more sense to focus on Kabul than on retaking Bagram.)

The Taliban has also made it clear they would consider the presence of American troops past the Aug. 31 withdrawal deadline a violating of the cease-fire.

Before Trump’s cease-fire agreement, he had removed restrictions on airstrikes meant to protect civilians, according to Brown University’s the Costs of War project, and it resulted in a tripling of the number of civilians dying in American airstrikes during his time in office.

Ivo Daalder, who served as the U.S. ambassador to the North Atlantic Treaty Organization under President Barack Obama, laid out the choice earlier this week. He noted Trump’s deal with the Taliban included the release of 5,000 prisoners whose return to the battlefield strengthened the Taliban as they bided their time, waiting for foreign troops to leave the country.

Faced with that choice, it’s not surprising that Biden ― who watched the Pentagon persuade Obama to pour more troops into Afghanistan over Biden’s objections ― would choose to withdraw.

“The status quo was not an option. Staying would have meant
U.S. troops taking casualties; American men and women back in the middle of a civil war. And we would have run the risk of having to send more troops back into Afghanistan to defend our remaining troops,” Biden said in July defending his decision to withdraw. “So let me ask those who wanted us to stay: How many more — how many thousands more of America’s daughters and sons are you willing to risk?”

Though it has been mostly Republicans calling for Biden to pour additional troops into Afghanistan or retake Bagram, many congressional Democrats also have called for Biden to ignore the Aug. 31 deadline, hold the Kabul airport and continue to evacuate Afghan allies and the remaining Americans.

Sen. Maggie Hassan (D-N.H.), for instance, said in a statement Thursday that the administration should “evacuate every American, as well as our partners who stood side-by-side with our troops to combat terrorism” and should ignore “arbitrary deadlines.”

But even military experts who question Biden’s decision to leave Afghanistan have argued that staying past the end of the month would risk military lives. Retired Gen. Barry McCaffrey, who has been critical of Biden’s handling of much of the withdrawal from Afghanistan, said Wednesday that holding the Kabul airport past Aug. 31 would be “utter nuts.”

“I am utterly appalled at so-called responsible people arguing with Biden’s decision to leave,“ McCaffrey said on MSNBC. “We do not want a shooting confrontation.”

Biden allies ― who have watched as Republicans like Sen. Josh Hawley (Mo.), who once bashed Biden for not leaving Afghanistan quickly enough but now hammers him over the withdrawal ― have grown increasingly incredulous.

“Republicans only have one false note that they’re willing to hit here, which is to posture like they’re tough by saying that we should put more of our troops into harm’s way — even after 20 years and 2,400 soldiers already lost,” one Biden ally said on condition of anonymity. “Where was this fake toughness when Trump was letting thousands of Taliban fighters out of prison or blowing wet kisses to their leaders?”

VoteVets, a progressive veteran’s group, argued against using the deaths of the service members to continue the war.

“What cannot happen is that hawks use these attacks to lure us back into protracted war, which would cost many more troops’ lives and create many more Gold Star families,” said Jon Soltz, the group’s chair and a veteran of the Iraq War. “In 1983, after the terrorist attack in Beirut that killed 241 troops, President Reagan made the determination to withdraw and not risk more American fallen. President Reagan made the right decision then. We support continuing our withdrawal now.”

Biden has left the door open to delaying the final departure of American troops to complete the evacuation effort. The State Department estimates 1,000 Americans remain in Afghanistan, with more than two-thirds of them already out of the country or close to leaving. The White House says the government airlift has evacuated more than 100,000 people since the end of July, though it’s likely tens of thousands of Afghans eligible for special visas will remain in the country.

The withdrawal retains the support of the American people: 50% in a Morning Consult/Politico survey said they support U.S. military forces leaving the country, compared with 39% who oppose it. Pluralities continue to support the withdrawal even when told it would lead to a Taliban takeover or create an opening for terrorist groups.

Biden, whose late son Beau served in Iraq, dedicated much of his address to offering sympathy for the families of the deceased service members and then sparred with the press over his handling of the chaotic withdrawal. But he knew what his final message would be.

“Ladies and gentlemen, it was time to end that 20-year war,” he told the gathered reporters before leaving.