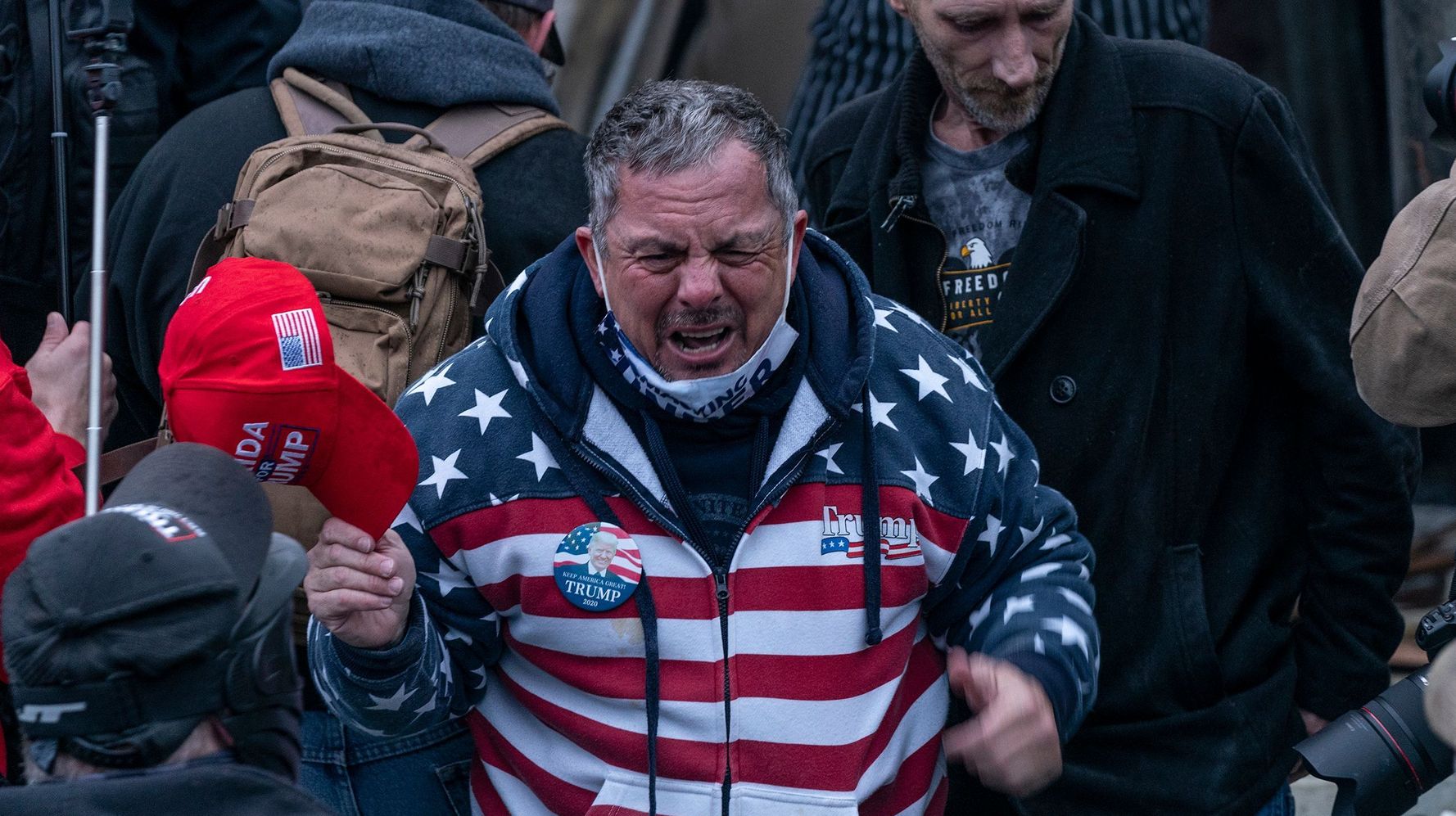 Robert Scott Palmer, known to online sleuths as #FloridaFlagJacket, was arrested in March after a HuffPost story revealed his identity.

A Florida man who attacked police officers at the Capitol with a fire extinguisher on Jan. 6 while wearing an American flag jacket emblazoned with “TRUMP” on the front and back will plead guilty to a felony as part of a plea deal he’s reached with federal prosecutors, his lawyer told HuffPost.

Robert Scott Palmer, a Donald Trump supporter who wore a “Florida For Trump” hat as he attacked officers protecting the Capitol, was arrested five months ago, just 12 days after a March 5 HuffPost story revealed his identity. Members of the #SeditionHunters community who are working to identify the Jan. 6 rioters had labeled him #FloridaFlagJacket. After speaking to an online sleuth HuffPost called “Amy,” we reached out to Palmer, who admitted he was in D.C. on Jan. 6 and claimed that the Biden administration was trying to “vilify the patriots” who stormed the Capitol. He hung up when HuffPost asked about the fire extinguisher.

Palmer’s attorney, Bjorn Brunvand, confirmed to HuffPost that his client plans to accept a plea deal. Court records showed that Palmer will appear for a plea agreement hearing before Judge Tanya S. Chutkan on Oct. 4.

Much like Scott Fairlamb ― the Trump supporter who attacked cops at the Capitol on Jan. 6 despite the fact that his father was a New Jersey trooper and his brother was on Michelle Obama’s Secret Service detail ― Palmer will plead guilty to a felony as part of his deal.

Palmer, Brunvand said, will enter a guilty plea to count three of his indictment: “Assaulting, Resisting or Impeding Certain Officers Using a Dangerous Weapon, Inflicting Bodily Injury.” The count states that Palmer used “a deadly or dangerous weapon, that is, a fire extinguisher” to assault officers performing official duties on behalf of the United States.

“He surrendered and turned himself in shortly after your story,” Brunvand told HuffPost. “We reached out to the FBI, and he turned himself in as soon as they were ready for him to ... Consistent with what what we’ve been doing since day one, he wants to accept responsibility for what he did.”

Brunvand said he would be asking for a variance downward from the agreed-upon guideline range, which will be spelled out in the plea agreement when it is filed. (Palmer has previous criminal offenses on his record, which will impact his sentencing guideline range.) Palmer plans to enter a guilty plea in-person, Brunvand said. The overwhelming majority of federal crimes are settled with some sort of plea deal.

Palmer had to shut down his business and has received harassing phone calls since his arrest, Brunvand said. Brunvand said that while he and Palmer were “complete polar opposites” when it came to their political views, he thought that Palmer was a “really nice man” with strong political views.

“This is what I do, I represent people charged with committing crimes,” Brunvand said. “In the majority of the cases, the crime that may have been committed is not necessarily a reflection of who they are.”

Federal authorities have charged nearly 600 defendants in connection with the Jan. 6 attack, and hundreds of more arrests are in the works. Online sleuths have successfully identified dozens and dozens of Capitol defendants who have not yet been arrested.

“Amy,” the online sleuth who helped identify Palmer, told HuffPost this week that she was glad that Palmer was taking responsibility for his crimes. Amy, who describes herself as a moderate, said it was important to her to help people understand that their behaviors were not patriotic.

“Taking a plea deal is at least accepting responsibility for your bad behavior, and boy, isn’t that what we all try to teach our kids?” Amy said. “When you mess up, accept responsibility. So hopefully he understands he messed up. I don’t know if he does or not, but hopefully he will when he gets to jail.”