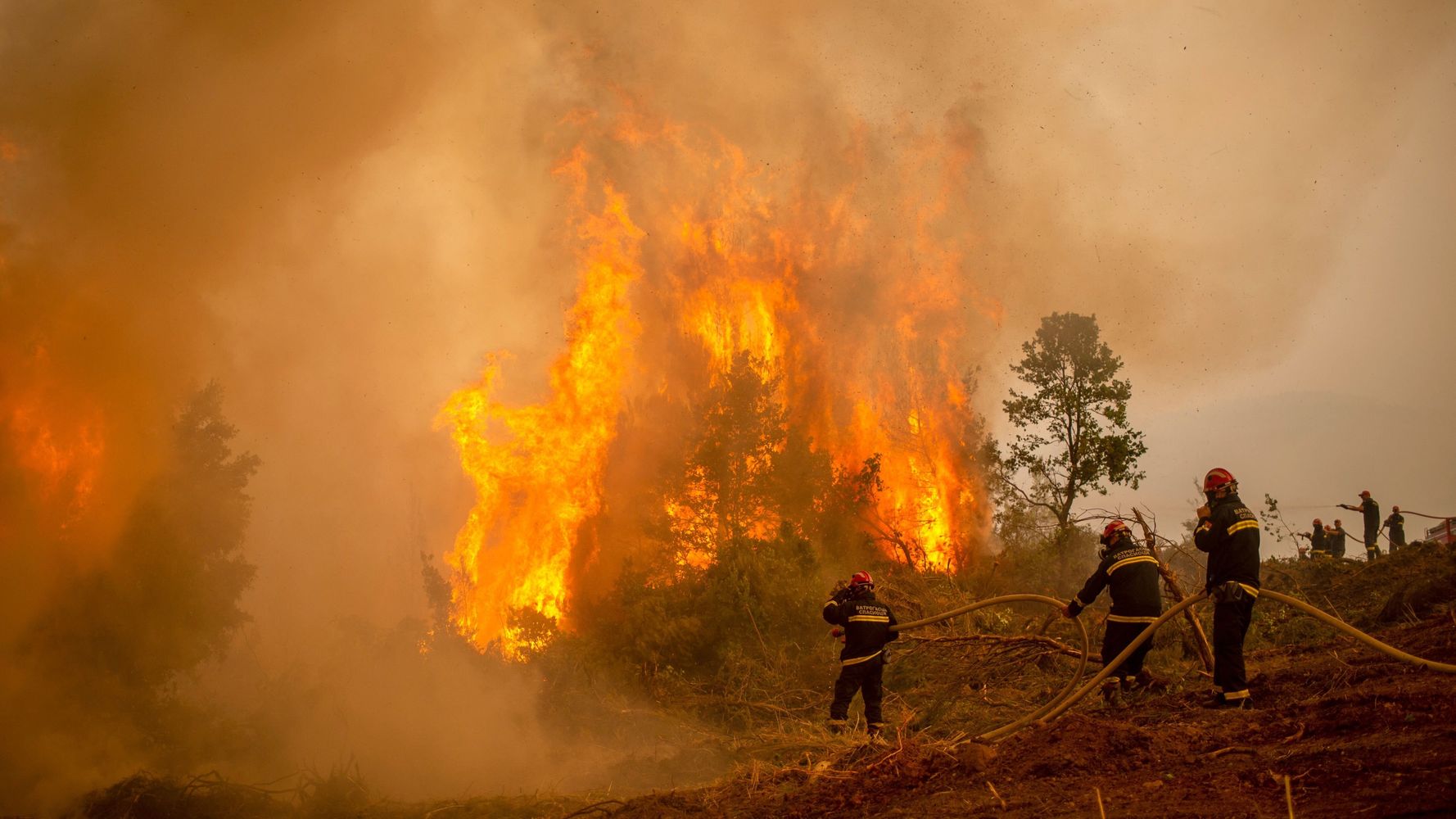 Firefighters and residents are battling into the night against a massive forest fire on Evia, Greece’s second-largest island, for a seventh day.

ARKITSA, Greece (AP) — Firefighters and residents battled into the night Monday for a seventh day against a massive fire on Greece’s second-largest island as the nation endured what the prime minister described as “a natural disaster of unprecedented proportions.”

Smoke and ash from Evia, a rugged island of forests and coves close to the Greek mainland, blocked out the sun and turned the sky orange. The fire, which began Aug. 3, is the most severe of hundreds in the past week across Greece, gobbling up pristine pine forests as well as homes and businesses and forcing hundreds to quickly evacuate by sea to save their lives.

Greece has been baked by its worst heat wave in three decades, which sent temperatures up to 45 degrees Celsius (113 Fahrenheit) and turned its prized pine forests into bone-dry tinderboxes.

In a televised nationwide address, Prime Minister Kyriakos Mitsotakis said the destruction in Evia and elsewhere “blackens everyone’s hearts” and pledged compensation for all affected, as well as a huge reforestation and regeneration effort. He also apologized for “any weaknesses” shown in addressing the emergency, a nod to criticism from some residents and officials who said Greece’s firefighting efforts and equipment were woefully inadequate.

“These last few days have been among the hardest for our country in decades,” Mitsotakis said. “We are dealing with a natural disaster of unprecedented dimensions.”

With roads on the island cut off by the flames, residents and tourists fled to Evia’s beaches and jetties to be ferried to safety by a flotilla of ferries and boats.

“We were completely forsaken. There were no fire brigades, there were no vehicles, nothing!” David Angelou, who had been in the seaside village of Pefki, said Sunday night after leaving by ferry to the mainland.

“You could feel the enormous heat, there was also a lot of smoke. You could see the sun, a red ball, and then, nothing else around,” he said.

Mitsotakis said Monday he “fully understands” the pain of those who lost homes or property, and the anger of those seeking airborne assistance “without knowing whether the firefighting aircraft were operating elsewhere or whether conditions made it impossible for them to fly.”

But he urged Greeks to reflect “not only on what was lost but also on what was saved in such an unprecedented natural disaster.”

Other big wildfires were still burning Monday in Greece’s southern Peloponnese region. Over the past week, hundreds of homes and businesses have been destroyed or damaged, and at least 40,000 hectares (nearly 100,000 acres) have been burned. Power cuts on Monday affected at least 17,000 households.

The causes of the blazes are as yet undetermined, though several people have been arrested for alleged arson. Greece’s top prosecutor has ordered an investigation into whether the high number of fires could be linked to criminal activity.

More than 20 countries in Europe and the Mideast have responded to Greece’s call for help, sending planes, helicopters, vehicles and manpower.

Greek authorities, scarred by a deadly wildfire in 2018 near Athens that killed more than 100 people, have emphasized saving lives, issuing dozens of evacuation orders. The coast guard said 2,770 people had been evacuated by sea across the country between July 31 and Aug. 8.

Some residents ignored the orders to try to save their villages, spraying homes with garden hoses and digging mini firebreaks.

“The villagers themselves, with the firefighters, are doing what they can to save their own and neighboring villages,” said Yiannis Katsikoyiannis, a volunteer from Crete who came to Evia to help his father save his horse farm near Avgaria.

“If they had evacuated their villages, as the civil protection told them to, everything would have been burnt down – perhaps even two days sooner,” he said. “Of course, they never saw any water-dropping aircraft. And of course now the conditions are wrong for them to fly, due to the smoke.”

On Monday, the flames raced across northern Evia, threatening yet more villages even as 600 firefighters struggled to tame the inferno, aided by emergency teams from Ukraine, Romania and Serbia, 5 helicopters and 5 water-dropping planes.

One Greek volunteer firefighter died near Athens last week while four more were in the hospital Monday, two in critical condition with extensive burns.

Wildfires were also burning in southern Italy, North Macedonia and Montenegro, where a large fire in the Malo Brdo district of the capital Podgorica was coming close to houses on Monday.

In Italy, authorities urged the public to be careful with fire amid a heat wave forecast for this week, when many Italians take summer vacations. Firefighters for weeks have been battling blazes in Sardinia, Sicily and Calabria, and two have died.

“We have faced very difficult and dramatic days fighting fires, and the temperatures that are forecast require the utmost attention,’’ said Fabrizio Curcio, head of Italy’s Civil Protection agency. “We are asking the maximum collaboration and caution from citizens ... to avoid any behavior that can set off a fire and report immediately the smallest blaze.”

In North Macedonia, dozens of wildfires followed the worst heat wave in decades. At least eight were still burning Monday, mostly in remote areas where only helicopters and planes could be deployed. Thousands of acres of forest have been destroyed and authorities have arrested five suspected arsonists.