'Who Are They Paying Secretly Now?': Signs Of UAE Meddling In U.S. Politics Go Ignored 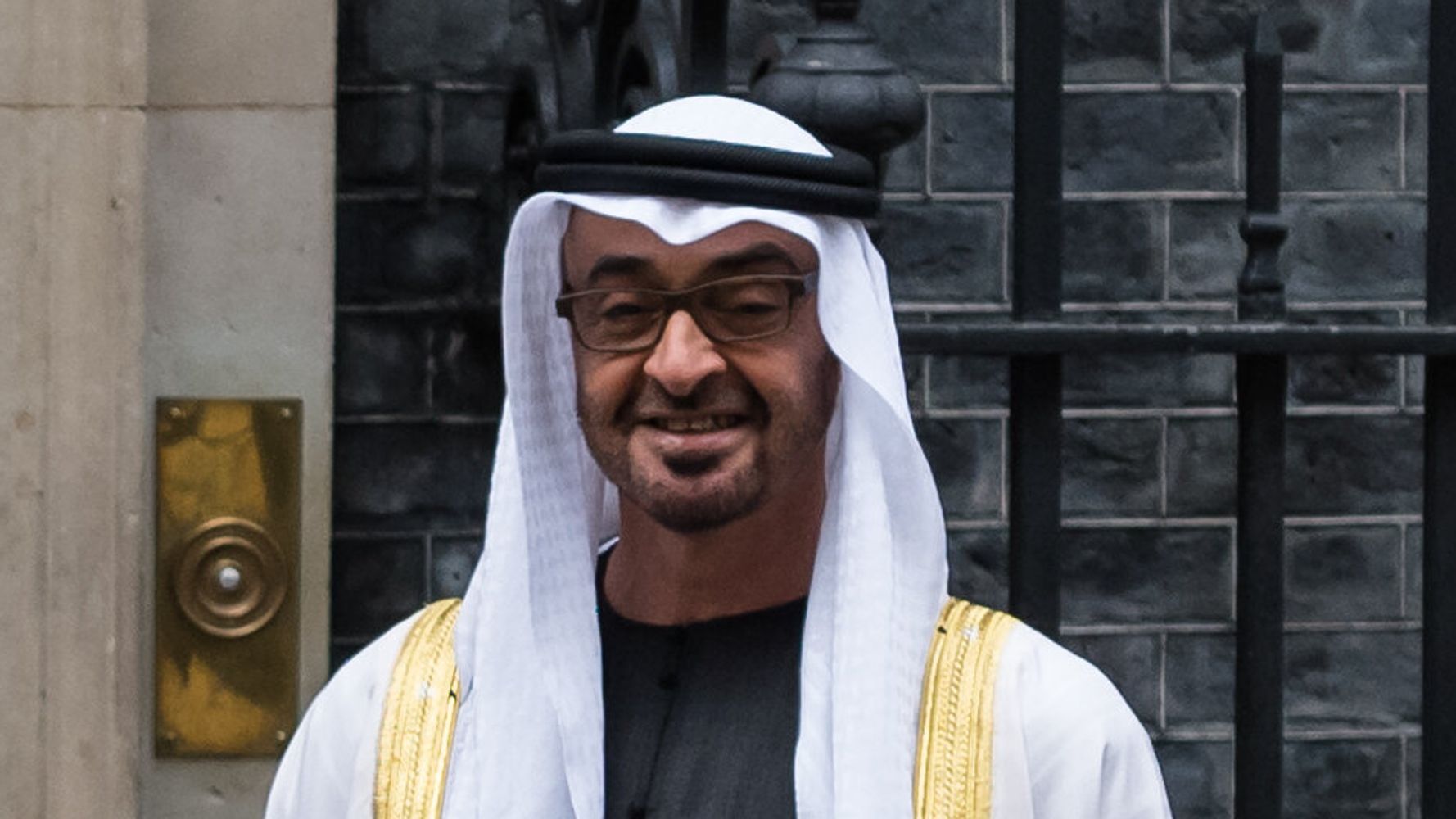 Prosecutors say the United Arab Emirates, a top U.S. partner in the Middle East, illegally interfered in the 2016 election. Do U.S. officials care?

On July 20, federal prosecutors accused the United Arab Emirates of infiltrating Donald Trump’s 2016 presidential campaign by using his adviser Tom Barrack as an agent. The new charges suggested that the wealthy Persian Gulf monarchy interfered in the 2016 election to a stunning degree: The Justice Department was already prosecuting a group of men for allegedly funneling over $3.5 million from UAE royal adviser George Nader to Trump’s rival, Hillary Clinton.

According to law enforcement, one of America’s closest Middle East partners played both sides in one of the most consequential contests in U.S. history ― breaking the law and undermining democracy.

In naming and shaming Barrack and the UAE, the Justice Department hoped to put “everyone — regardless of their wealth or perceived political power — on notice,” acting Assistant Attorney General Mark Lesko said in a press release about the indictment.

William Sweeney Jr. of the FBI’s New York field office underscored the importance of the charges: “American citizens have a right to know when foreign governments, or their agents, are attempting to exert influence on our government ... This is especially important to Americans during a presidential election year.”

But despite growing suggestions of UAE election interference and cases targeting American citizens like Barrack and Nader, the Emiratis appear to have avoided any consequences or any pressure that would deter similar schemes in the future.

If anything, the UAE has fared better under President Joe Biden than might have been expected, given the president’s criticism of human rights abusers and governments that meddle in U.S. politics. In April, HuffPost revealed that Biden quietly OK’d a plan to sell $23 billion in advanced weapons to the UAE, despite opposition on Capitol Hill and among rights groups over Emirati repression and ties to China and Russia. The Justice Department is now defending that arms deal in court, even as the agency simultaneously prosecutes the UAE’s allies for compromising the 2016 election.

Just days before the Barrack indictment, U.S. officials welcomed the Emirati diplomat Anwar Gargash to Washington for the most important meetings yet between the UAE and the Biden administration. Gargash met with the deputy chief of the State Department, as well as prominent senators and Biden’s top adviser on the Middle East.

White House and State Department officials wouldn’t say if the U.S. has ever raised the Justice Department’s claims with UAE officials. The Nader indictment has been public for years ― though there’s nothing to indicate it spurred any action by the Trump administration ― and Biden’s national security staffers may have received advance word of the Barrack indictment before the Gargash visit.

Lawmakers deflected HuffPost’s queries about possible congressional investigations or censure. The three senators who met with Gargash during his trip ― Sens. Jeff Merkley (D-Ore.), Todd Young (R-Ind.) and Bill Hagerty (R-Tenn.) ― did not respond to requests for comment.

Without further action, experts on global affairs and campaign law say it will be impossible to know the full extent of the UAE’s alleged political meddling. And the lack of consequences will be clear to other foreign states with similar resources and motivation to warp the democratic process.

“The big question I have is, who are they paying secretly now?” Sen. Chris Murphy (D-Conn.), the chair of the Senate Foreign Relations Committee’s Middle East panel, told HuffPost. “We should be talking more about whether this is the end of the story or the tip of the iceberg.”

“What Congress should do is ask the national security agencies to come forward and do an investigation and provide the information to see whether it’s more extensive than just what they were doing ― not that what they were doing was not inappropriate,” said Ravel, who is now a lecturer at the University of California, Berkeley.

Barrack disputes the Justice Department’s claims. The UAE embassy in Washington did not respond to a request for comment; Gargash has previously denied that his government interfered in the 2016 election.

“Trump’s dealings with the Emirates and Saudi Arabia deserve to be investigated as thoroughly as his administration’s relationship with Russia,” she wrote. “So far, that hasn’t happened.”

The 2016 election offered Americans two choices. For the UAE, there were four possible scenarios, two of them desirable.

If Clinton won, she might follow in President Barack Obama’s footsteps on foreign policy. This possibility worried the Emiratis, because of Obama’s diplomacy with their foe Iran and his skepticism of American military action abroad, which states like the UAE see as vital for their own security and the credibility of the U.S. as a partner. The UAE would have much preferred for Clinton to double down on traditional hawkish policies.

Trump, meanwhile, perturbed the UAE, and officials feared he could create a nightmare outcome for the U.S.-aligned Arab regimes. He bashed America’s foreign relationships, directing particular ire at the UAE’s close ally Saudi Arabia and at Muslims more broadly. But there was still the possibility of a positive outcome. Trump’s unfamiliarity with national security issues, and his distaste for ethical standards, offered an opportunity: If foreign officials could win him over, even using unconventional means, they might wield far greater power than they ever envisioned.

The two indictments implicating the UAE claim that the regime quietly ― and illegally ― tried to ensure one of its two preferred outcomes.

In late 2015, Nader, the UAE adviser, met a California-based businessman named Andy Khawaja in the Emirates. Khawaja had never before made a political donation, per The New York Times.

Starting in March 2016, Khawaja began pumping money to pro-Clinton committees and attending events in support of her. All the while, he was communicating with Nader, according to messages obtained by the Justice Department.

Nader sent nearly $5 million from a company he controlled in the UAE to Khawaja’s company in West Hollywood, California. Their correspondence shows that Khawaja understood the payments from Nader to be reimbursements for his campaign contributions. And Nader’s messages repeatedly say he was informing “HH” ― a term for “His Highness,” Crown Prince of Abu Dhabi Mohammed bin Zayed ― of their collaboration.

Zayed and some of his top aides were also handling the UAE’s recruitment of Barrack, the Trump fundraiser, as he came to view them as his “home team,” the Justice Department’s indictment suggests. Barrack shared a draft of a major campaign speech with UAE officials, then made sure it included language they wanted. He used six major media interviews as a Trump campaign surrogate to push pro-UAE talking points, and crafted a strategy to align UAE investments with the policies of a future Trump administration.

The DOJ indictment does not indicate a clear payout for Barrack for his work using the Trump campaign to benefit the UAE. But Ravel, the former election commissioner, said it shows misconduct regardless.

“The fact that he was maybe not paid, but expected to be paid or somehow to get a better position later, I think, is sufficient to say that it was improper foreign influence in the electoral process,” she told HuffPost.

The trials of Barrack, Nader, Khawaja and their associates will likely continue for years.

Nader became a cooperating witness in special counsel Robert Mueller’s investigation into the 2016 election, then pleaded guilty to separate charges of sexually exploiting children in 2020, receiving a jail sentence of 10 years. He tried and failed to secure a pardon from Trump.

Khawaja left the U.S., denied the Justice Department’s allegations and claimed with little evidence that the UAE was persecuting him. Lithuanian police detained him in 2020 at the request of the U.S. A Justice Department spokesperson told HuffPost he couldn’t comment on extradition plans.

While litigation against Nader, Barrack and others will likely expose further information about the UAE’s tactics, there’s no certainty that there will ever be a comprehensive, public accounting of how the U.S. partner may have breached American laws and norms.

That stands in stark contrast to the multiple reports produced on Russian election interference.

Max Bergmann, a Center for American Progress fellow who ran a project tracking Trump’s ties to Russia, said there are significant differences between the alleged Emirati effort and the Russian plans, given Moscow’s aversion to Clinton and its sweeping use of tactics like hacks and leaks. Still, he believes Biden’s pushback against Russian meddling is insufficient if it doesn’t include a challenge to interference by other states.

If Biden aides haven’t raised the issue with the Emiratis, “that’s concerning,” said Bergmann, a former State Department official. “They need to know that we know what happened and that that’s not OK, and if they try to do this again, then that’s going to have huge consequences for the bilateral relationship ... There needs to be a red line in terms of interfering in our democracy.”

If the Biden administration or Congress did dig into the UAE’s alleged election meddling, they could make a vital point to foreign governments and show Americans that degrading democracy for the sake of a paycheck isn’t worth it.

More information about how Barrack came to allegedly break the law and the UAE’s choices in their relationship could, for instance, help officials tweak enforcement and regulation policies to ensure that elections reflect Americans’ interests and preferences, not wealthy foreigners’ views.

“It may be more on his shoulders than on the UAE’s,” said Sen. Tim Kaine (D-Va.), a member of the Senate Foreign Relations Committee, referring to Barrack. “Foreign governments often hire U.S. folks to do their work for them. There’s nothing controversial about that. The question is, was there some cooperation between them in this nondisclosure?”

Bergmann said investigations of Trump’s associates have revealed the many vulnerabilities available to countries seeking to illegally influence American politics. “They were just pushing on all these open doors,” he said.

Since Trump’s election, there’s been a clear uptick in Justice Department scrutiny of illegal political activity by foreign governments. Between 1966 and 2015, the agency only filed seven cases against unregistered foreign agents, an inspector general’s report showed.

Today, multiple high-profile prosecutions show that a wide range of countries have exploited historic impunity. Officials are currently also investigating the claim that the UAE’s nemesis, the regime in neighboring Qatar, paid nearly $10 million to a political donor named Imaad Zuberi for unregistered work, including a meeting with the Trump campaign after the 2016 election, The Associated Press revealed.

Experts say Washington can’t afford to ignore patterns like the UAE’s behavior if it wants to stop that kind of behavior.

“By not holding the UAE accountable... the U.S. is sending a clear message to other would-be malign foreign actors,” Ben Freeman of the Center for International Policy recently wrote. “You can secretly undermine the U.S. political system without fear of reprisal.”