Trump Tried To Overthrow Democracy, But People Are Still Happy To Take His Money 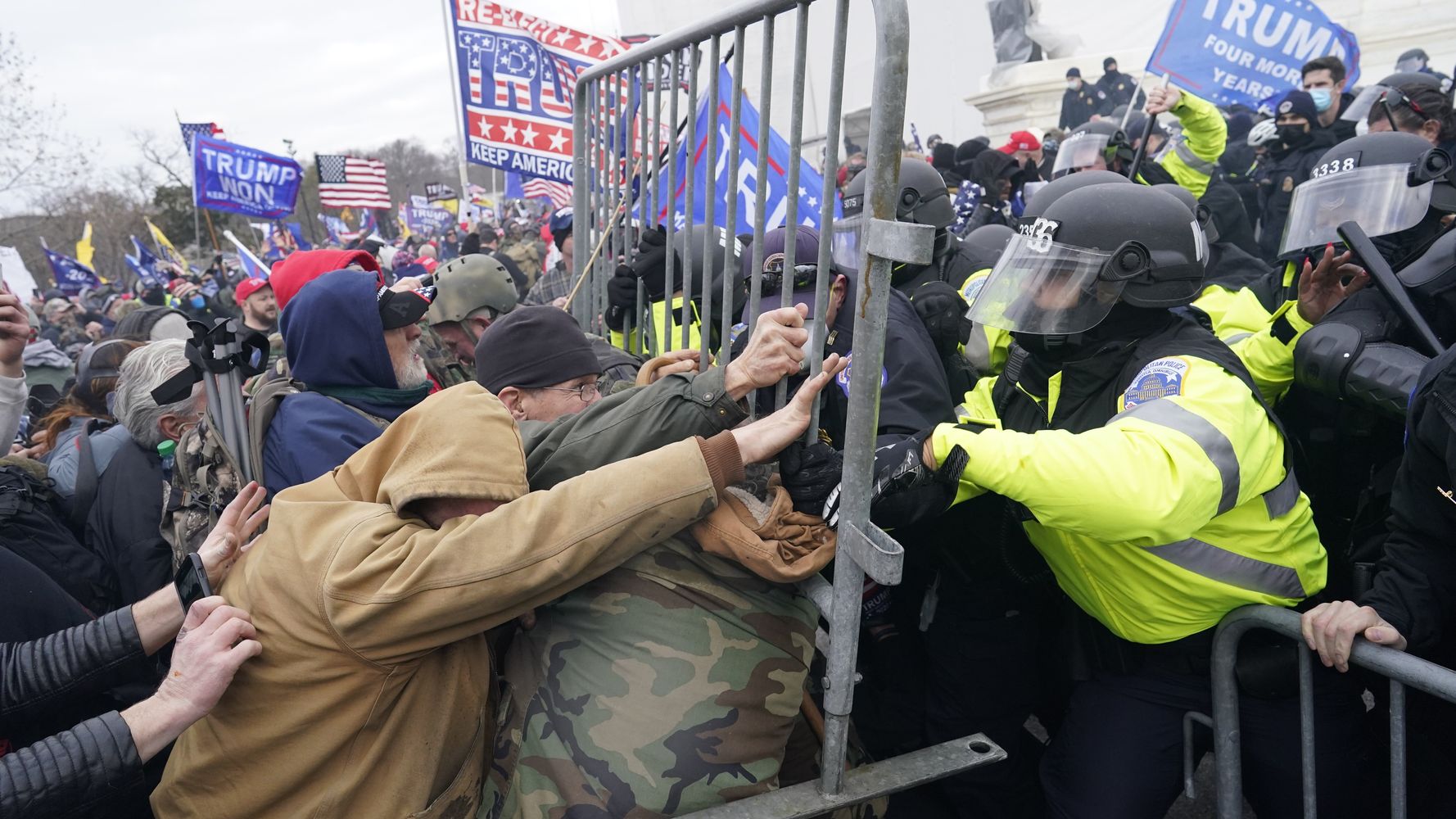 More than 100 businesses and three dozen individuals accepted $21 million from his political committees after the Jan. 6 insurrection, according to the FEC.

More than 100 businesses and three dozen individuals have accepted $21 million and counting from Donald Trump’s political committees to help spread his lies about a “stolen” 2020 election — even after the Jan. 6 insurrection he incited to overthrow American democracy.

The business payments from Trump’s Save America “leadership” committee and affiliated groups range from as little as $29.47 to a Home Depot in Atlanta to as much as $3.6 million to WinRed, the Republican firm created to process small-dollar donations, according to a HuffPost review of Federal Election Commission filings for the Jan. 7 to June 30 period.

Pay to individuals varied from $300 in consulting fees to former Melania Trump staffer Mary Casey Finzer to $135,139 to Alexander Cannon, a longtime lawyer for the Trump family.

While the vast majority of the people who have taken paychecks or consulting fees from Trump’s political committees previously worked for his campaign or in his White House, most of the 112 businesses that received money have no connection to politics.

Political scientists and authoritarianism researchers said the broad readiness to do business with Trump, despite all he did and continues to do to undermine democracy with his lies about the 2020 election, is a worrisome sign for the country.

“Here is the blunt reality: Individuals or firms that take money from a group trying to kill democracy are taking blood money,” said Norman Ornstein, a fellow at the conservative-leaning American Enterprise Institute. “The blood of a free and fair political system and society is on their hands.”

Lucy Caldwell, a conservative activist who ran former Illinois Rep. Joe Walsh’s primary election challenge to Trump in 2020, said the excuse some Republicans had for working in Trump’s White House — that they could make it a calmer, more rational place — is no longer available.

“If you were just along for the ride these last four years and your heart is in the right place … then it’s inconceivable that you would proceed to continue to prop up and enable the proto-fascism of Trump and his ilk,” Caldwell said. “These people want to destroy American democracy, and there is no other scenario in which we’d buy an excuse like theirs in another historical context: Naziism, the KKK, take your pick.”

HuffPost reached out to dozens of the firms and people who, according to FEC reports, accepted money from Save America, the Make America Great Again PAC, Make America Great Again Action or a pair of associated joint fundraising committees. None responded to queries about their work on behalf of Trump — with the exception of Liz Harrington, a former Republican National Committee staffer who is now Trump’s spokesperson.

“I’m very proud to work for President Trump,” she said, adding that she agrees with Trump’s false claims about the election and predicts that he will be vindicated as the so-called “audits” in various states are completed. “Of course, the election was rigged…. We will be proven right.”

Trump spent weeks attacking the legitimacy of the Nov. 3 election he lost, starting his lies in the predawn hours of Nov. 4 that he had really won in a “landslide” and that his victory was being “stolen” from him. Those falsehoods continued through a long string of failed lawsuits challenging the results in a handful of states.

Trump and some of his advisers even discussed using the United States military by invoking the Insurrection Act or declaring martial law to retain power despite having lost the election, including by seizing voting machines and ordering “re-votes” in states narrowly won by President Joe Biden.

But military leaders had earlier made clear they would not involve themselves in the political process, so after the Electoral College finally voted on Dec. 14, making Biden’s win official, Trump instead turned to a last-ditch scheme to pressure his own vice president into canceling the ballots of millions of voters in a handful of states Biden won and declaring Trump the winner during the pro-forma congressional certification of the election results on Jan. 6.

Trump asked his followers to come to Washington that day, and then told the tens of thousands who showed up to march on the Capitol to intimidate Pence into doing what Trump wanted.

Here is the blunt reality: Individuals or firms that take money from a group trying to kill democracy are taking blood money. Norman Ornstein, a fellow at the American Enterprise Institute

The mob of supporters he incited attempted to do just that by storming the building. They even chanted “Hang Mike Pence” after Pence refused to comply with Trump’s demands.

A police officer died after being assaulted during the insurrection, and four others took their own lives in the days and weeks that followed. One of the rioters was fatally shot as she climbed through a broken window into an anteroom containing still-evacuating House members, and three others in the crowd died during the melee.

While the House impeached Trump for inciting the attack, all but seven Senate Republicans, led by their leader, Kentucky’s Mitch McConnell, chose not to convict him – thereby letting Trump continue his political career.

Trump and his allies are now engaged in a campaign to portray the rioter who was shot, Ashli Babbitt, as a martyr and the hundreds of others who have been arrested as victims of political persecution. Trump himself continues to suggest he will run for the 2024 GOP nomination and is using his Save America committee’s money to continuing spreading the same falsehoods that culminated in the events of Jan. 6.

Trump created Save America within days of losing the 2020 election and raised some $80 million on the promise that he would use the money to conduct legal challenges of the results and help Republicans win two Senate runoffs in Georgia. In fact, not a dime of that money was used for election challenges or the Georgia races. Nor has any of the money gone to GOP candidates for use in the coming midterm elections, as Trump has also suggested.

Instead, the bulk of his spending was for raising even more money, the HuffPost analysis shows.

Neither company responded to HuffPost’s queries about their decisions to provide their services to Trump.

Among other companies that almost certainly knew they were doing business with Trump: Ace Specialties, the Louisiana company that has been making his “MAGA” hats, which received $94,937; Paychex, a West Palm Beach payroll processer, which took in $111,378; the prominent Washington law firm Jones Day, which received $370,299; and Chain Bridge Bank in McLean, Virginia, which took in $4,741 in bank fees.

Some of the biggest checks went to high-ranking Trump campaign officials and White House staff.

Jason Miller, who was making $35,000 a month on the campaign as a “chief strategist,” was paid $132,500 through his business SHW Partners LLC before he left to run a new social media company. Top campaign staffers Bill Stepien and Justin Clark received $80,562 through their National Public Affairs LLC. Former White House lawyer Stefan Passantino received $206,480 through his Elections LLC firm.

And Brad Parscale, whose Parscale Strategy LLC took in $35.9 million from Trump’s 2016 and 2020 campaign runs, received $55,000 from the post-presidency Trump groups — although two other businesses at the same Fort Lauderdale address, Dyspatchit and BCVM Services, received $38,484 and $452,843, respectively. Parscale did not respond to HuffPost’s queries.

Trump also managed to funnel $263,044 to himself through rent and lodging at his own properties, as well as $1 million to America First Policy Institute, a 501(c)3 charity run by a former White House aide, Brooke Rollins.

One Trump adviser, who spoke on condition of anonymity, said the money was to pay for Trump’s lawsuits against social media companies for throwing him off their platforms because of Jan. 6.

America First Policy Institute did not respond to HuffPost’s queries.

Other campaign and White House staff have also continued to wok with Trump: Sean Dollman, the campaign’s operations director, was paid $111,104 through June 30; Nick Luna, Trump’s personal assistant at the White House, received $48,057, and Harrington, who joined Save America in June after Miller left, was paid $3,785 by the end of that month.

“Do you think people should be unemployable because of their political beliefs?” she asked when questioned about her enthusiasm for spreading Trump’s lies.

One former White House aide, who spoke on the condition of anonymity, said that for many former Trump White House and campaign officials, especially those in public-facing jobs, working for Trump’s political committee now is probably all they can manage, particularly after Jan. 6, when the corporate and academic communities shut their doors to Trump World.

“For some of these people, this is probably the best thing available to them,” the former aide said.

Caldwell, though, found that laughable. “The idea that there is no alternate way for any of these Trump alums to earn a reasonable living is the lamest, most disingenuous excuse,” she said. “Even if it were true ― it’s not ― would that even be justifiable?”

David Bowes, a Democratic consultant who runs the Never Again PAC created to defeat the 147 Republicans who voted to overturn Biden’s election victory just hours after the Jan. 6 assault on the Capitol, said those who choose to work for Trump today are actively endangering the country.

“Republican staffers choosing an easy paycheck working for Trump are as big a threat to democracy as Trump himself,” he said. “They whine in the background about how Trump owns the GOP while in the foreground continue working to push the same lies and conspiracy theories that led to January 6th.”